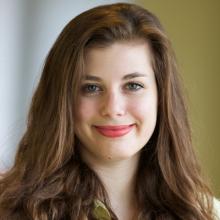 Emily is Communications Manager for WRI’s Global Energy Program, which works to accelerate renewable energy deployment, increase energy productivity, and close the gap between clean energy and energy access. Emily previously worked in communications for the Coalition for Urban Transitions, a project jointly managed by the Ross Center and New Climate Economy, and for WRI’s Forest Legality Initiative, raising awareness of the Initiative’s work and strengthening and expanding partnerships with FLI’s members through communications and outreach support.

Before joining WRI, Emily was based in Armenia, where she managed communications for an international reforestation NGO, worked as an environmental journalist, and consulted at the American University of Armenia’s Acopian Center for the Environment. She has also worked in communications for the National Audubon Society. Emily has experience in many communications mediums, including journalism, photography and filmmaking. Emily received a dual B.A. in Environmental Studies and French from Bates College. She is passionate about learning new languages and once tracked and captured puffin chicks for a living.